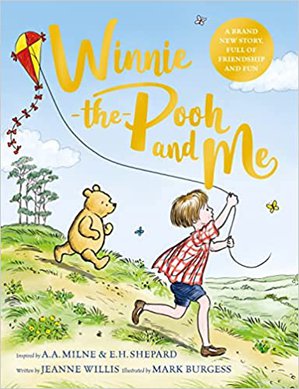 A brand-new Winnie the Pooh story, inspired by one of A. A. Milne's classic poems, featuring beloved characters. Whatever we do, there’s always two, there’s Winnie-the-Pooh plus Me. And Pooh said, ‘That is very true.’ But sort of wondered if I knew, it was two once, but then it grew… Someone has come along to join Winnie-the-Pooh and Christopher Robin on their adventure, but who could it be? It can't be Kanga and Roo – they're sailing a boat – and it can't be Owl, because he's at home. Could it be Heffalumps who want to eat Pooh's beloved honey? Or perhaps Pooh and Christopher Robin are accompanied by a pair of friends who are never far away on a sunny day. With a gentle rhyming story by bestselling author Jeanne Willis, inspired by A. A. Milne's classic poem 'Us Two' from Now We Are Six, and charming illustrations by Mark Burgess, in the style of E. H. Shepard, this authorised sequel is the perfect gift for anyone who loves the enchanting world of Winnie-the-Pooh and friends.